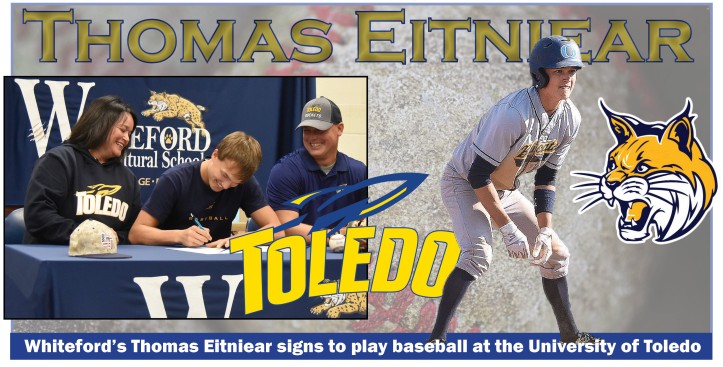 OTTAWA LAKE – Thomas Eitniear signed a national letter of intent Friday to play baseball at the University of Toledo.

The Whiteford High School senior said he fell in love with the campus, which is about 25 minutes from his home, several years ago.

“I felt like I had a connection with the coaching staff,” he said. “I felt like if I went there they were going to push me to be the best player I can be, to max out to my full potential.”

Eitniear is a three-sport athlete at Whiteford, leading the basketball team in scoring and breaking several records as quarterback for the Bobcat football team. He is a three-year starter on the baseball team heading into his senior season.

“All of the other sports I love playing and I enjoy being around the guys, but baseball is what I want to do at the next level,” he said Friday after the ceremony in the high school library.

“It was awesome to know that everyone cares about my decision and what I am going to pursue,” he said. “My parents have so much support for me. They sacrifice so much – gas money, food, the summer – they’ve done so much for me.”

Eitniear was named second team All-State by the Michigan High School Baseball Coaches Association as a sophomore. Last season he had 32 runs scored, 26 stolen bases and 19 RBI for the Bobcats.

Eitniear is the first Division 1 boys’ athlete from Whiteford to sign out of high school since George Flanner went to Central Michigan University on a track scholarship in 2008 and one of only a handful of Division 1 athletes ever from Whiteford.