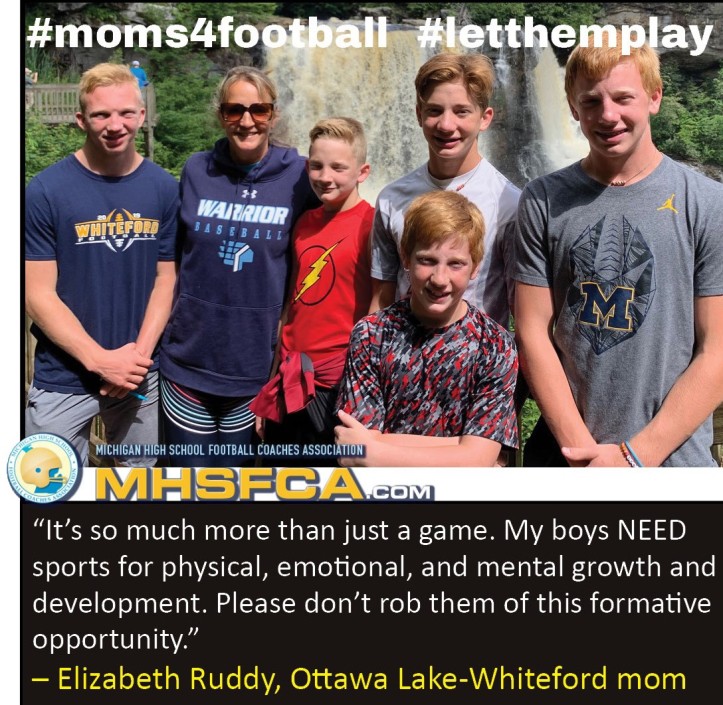 “When Ethan started back to football workouts this summer, when they were allowed to get together as a team, that’s when I started seeing the light come back in him again,” Eyler said. “It kills me to think if they take this away.”

Eyler is one of thousands of high school football players scheduled to be on the football field tomorrow as the first official practice of the 2020 season begins. Eyler is a three sport athlete who played on Summerfield’s state championship baseball team in 2019 and led the team in tackles a year ago on the football field. Without football, his mom said, he’s not been himself.

“Kids get such a habit of not doing anything without sports,” Eyler said. “I know sports isn’t the reason kids go to school. I was on the board of education for eight years and that was instilled upon us. But kids need sports and band and extra-curricular activities. It’s incentive to do well in school.”

For now, the season is on track.

“After much waiting, anxiety and many temperature checks, we finally get to start football practice on Monday,” said Scott Farley, executive director of the coaches association. “We are facing many new and different protocols and ways of operating.  It is imperative that we all take these issues seriously and follow the protocols set forth by the MHSAA.

“Covid-19 is our opponent right now, just like our Week One opponents.”

Several mother’s from around the state say it is not just about watching their son’s play football on Friday nights. Returning to the field, they say, teaches them lessons that can’t be learned in other avenues.

“This is not just about football,” said Andrea Hahn, mother of a Unionville-Sebawaing senior-to-be. “It’s about standing up. It’s about displaying courage and leadership. It’s about lifting up your brother. It’s about having a voice. … Football goes beyond Friday nights.”

Monroe’s Molly Moore is a former women’s softball coach at Adrian College. One of her son’s played on the Monroe St. Mary Catholic Central state championship football team a year ago while the other is a freshman hoping to start football practice Monday.

“It would be devastating to not have sports this fall,” she said. “Yes, we have concerns, but what we are seeing, every parent we talk to now, says you can’t take one more thing away from them.”

Moore said her son played travel baseball this summer. If state officials put a halt to high school football, she expects her son to continue with travel baseball season. As several parents and school officials have said, even without football, kids are going to find a way to get together and play sports.

“Anybody who has played sports and been around it, coached it or whatever, knows you can’t replace that kinship of going to war with the people next to you,” she said. “Kids need that.”

She said its important for student-athletes to get back to normal.

“In our quest to protect them, we started thinking we were doing more harm than good,” she said. “They’ve got to get back to some sort of human contact.”

Jen Silvas, a parent of Flint Kearsley quarterback Braylon Silvas, said she does not want to see her son miss football for something that is unknown.

“The teams need their coaches more than ever, to push them to be greater and to not be afraid of the unknown, especially now,” she said. “The team needs to be together to fight for something they enjoy.”

Tonya Palmer is the son of a Unionville-Sebawaing player, said football builds character.

“High school football is more than a game to our boys,” she said. “It is a passion that builds character and bonding. My senior has worked hard for the last eight years for this season. We all need normalcy and unity now more than ever.”

For seniors who might have already had their spring sports season eliminated as juniors due to Covid-19, fall sports is a chance to get back to normal.

“My son has been playing football since the first grade,” Fowlerville mom Cheryl Lampman said. “This is his senior year, his final year. There is no pause button.”

Elizabeth Ruddy is Whiteford’s varsity volleyball coach and her son’s play in the Bobcat football program.

“It’s so much more than just a game,” she said. “My boys need sports for physical, emotional, and mental growth and development.”

Summerfield’s Eyler is a dental hygienist in Maumee, Ohio. She’s hoping football season will not just move forward Monday but stay on schedule to start the season in a few weeks.

“I work six inches from everyone’s mouth,” she said. “I have never felt unsafe at work. We can’t live our lives in fear because of the unknown. We’re depriving these kids of being kids. You can’t get this time back.”